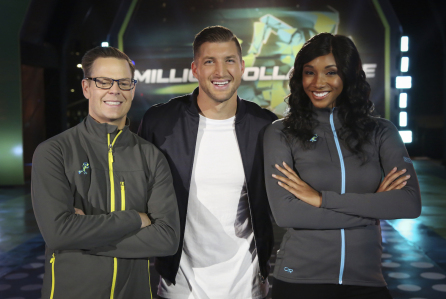 Tim Tebow, former college football champion and NFL quarterback, will serve as host of MILLION DOLLAR MILE, a new 10-episode high-stakes physical competition series on The CBS Television Network. Maria Taylor, reporter for “ESPN GameDay” and Matt “Money” Smith, the voice of the L.A. Chargers play-by-play, will serve as commentators. “Watching good people compete at their highest ability is always inspirational to me,” said Tebow. “MILLION DOLLAR MILE is a show that does just that – it motivates, thrills, and is aspirational and I’m excited to be hosting this show.”

In this unprecedented television event series, contestants will have the chance to win $1,000,000 every time they run the Million Dollar Mile. Standing in their way is the most challenging and largest course ever designed and a group of elite athletes with one mission – to stop the contestants from winning the money at all costs. Currently, the series is in production in Los Angeles for broadcast on the CBS Television Network.

Tebow is a two-time national champion, first round NFL draft pick and Heisman Trophy winner. Currently, he serves as a college football analyst for ESPN. Prior to joining ESPN, he played three years in the NFL for the Denver Broncos and the New York Jets. Now, Tebow is pursuing a career in professional baseball as a member of the New York Mets organization.

Maria Taylor is in her sixth season as an analyst, host and reporter for ESPN. In 2017, Taylor became the first Black woman to co-host College GameDay Built by The Home Depot. Also, Taylor was the sideline reporter for ABC Saturday Night Football and patrolled the sidelines for the 2018 College Football Playoff and National Championship Game. Previously, she served as the first female host of SEC Network’s traveling college football show, SEC Nation, alongside analysts Tim Tebow, Marcus Spears and Paul Finebaum.

Matt “Money” Smith has been a Southern California sports staple since 1996. In 2017, Smith was named lead play-by-play announcer for the radio broadcasts of the L.A. Chargers. On television, he has spent the last seven years as host on the NFL Network franchise “Fantasy Live” and drives coverage during the Super Bowl, NFL Draft, NFL Combine and other NFL-sanctioned events.